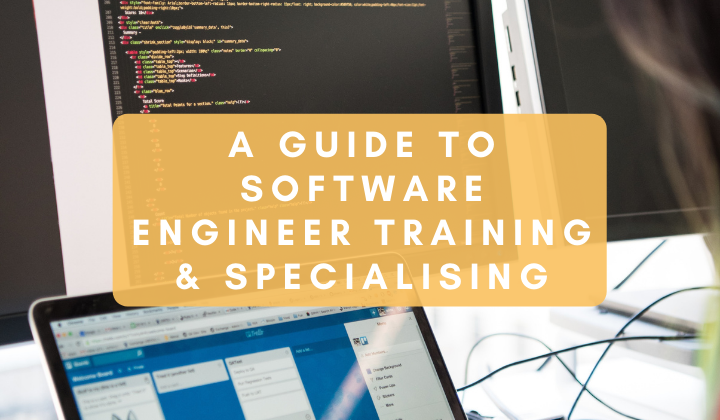 So You Want to Be A Software Engineer… How Are You Preparing? Training? Specialising?

Choosing a career in software engineering is a great choice… and a vague one. It’s like saying you want to be in sports! This guide will help you zero in on your future by explaining specialising and training for a software engineer career.

If you’re looking to sharpen your skills, I recommend taking a free online course. Our Software Development Training programme is designed to guide you through specialisations, programming languages and career choices. Did I mention it’s free?

Firstly, it’s a good idea to learn one of the really common languages like JavaScript or C# before you start thinking about specialising. Every role below will probably need knowledge of these languages, so you might as well get them under your belt.

Once you’ve figured out the languages you want to learn, get stuck in! Take an online course, watch a YouTube video and join a GitHub project.

And finally, once you’ve got some project experience under your belt get to making your professional tech portfolio. You’ll really impress employers!

Are you applying for the wrong jobs?

Take the quiz to find out which job in tech or media is right for you.

Front-end developers use their coding skills to create great visual web designs. They usually work with back-end developers to make a user-friendly product. Front-end devs have to have an amazing eye for detail, creative mind and a love of solving problems.

They may also use server side languages just like backend developers, because much of the page is often built on the server rather than in the browser.

Increasingly they’ll use frontend frameworks such as Vue.js, React or Svelte.

Back-end devs are in charge of making everything work, basically. They use code to make sure that everything they create runs smoothly and simply. Experts in problem-solving and analytical thinking, back-end devs are key to getting anything up and working well online. Back-end developers tend to be most concerned about things like the best way to organise data, communicating with other services via APIs and enforcing business rules.

They’ll know about infrastructure that the application relies on:

App development can be split two ways – into iOS and Android specialisms. In a nutshell, any app you download onto your phone or computer was made by an app developer. They’re expert communicators and – you guessed it – problem solvers! (Sensing a theme?)

If you’re looking for something more interactive, a career in games development might be for you. These devs write the code that makes video and computer games run. This is another great choice for creative coders who want to work with a team of likeminded people.

Just as importantly, they’ll also be using game engines and frameworks such as Unity3D.

Going for a career in data science is a smart choice. You’ll be earning big bucks at the higher ranks, helping different clients and companies extract and analyse data. You’ll be an expert in machine learning and data mining. You will need an analytical, organised mind and a love of numbers.

Now that you know what area you want to specialise in, where are you going to apply for jobs?

The DigitalGrads team specialised in tech roles a long time ago. Now we work with start-ups and big companies across the UK, making junior hires and fulfilling career dreams. If you’re looking for an exciting junior role with an innovative tech company, sign up today and start applying!