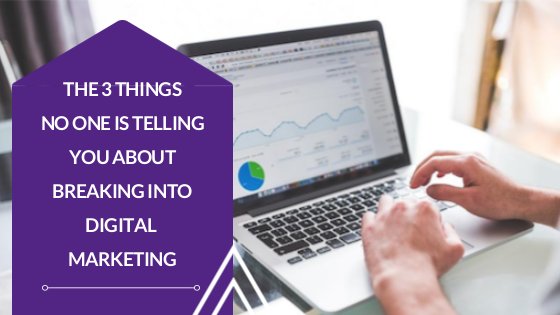 Breaking into digital marketing is hard. When I graduated with a media communications degree in 2015, I wrongfully assumed that employers would be knocking down the door trying to get me to work for them. If only I knew then how wrong I was. After months of frustration, I actually had to give up on my search for a digital marketing position. I instead settled into working retail.If this kind of scenario sounds familiar, read on. You don’t have to end up like I did back then – waiting months to land a digital marketing job. With a little bit of hard work, you can end up with a career in the field.Here’s what no one’s been telling you about getting your first job in marketing…until now.

There’s a Time for Being Blunt…

If you’re going to get a job in this industry, you have to know just how hard it is.Honestly!That may sound discouraging at first, but if you don’t have the perseverance to stick with your search, you won’t end up working in the field.

Digital marketing is hot. Everyone wants to work in it, and most people think that they have the ability to do so. When you apply for jobs, you’ll likely be up against hundreds of other applicants – or at least several dozen.

Here’s what you can do about that:

Work harder than anyone else and look where they refuse to look. Stoop to the positions that others are too good for.In digital marketing, almost everyone applying for the “good” jobs are those who have relevant experience. If you’re fresh out of college, it’s unlikely that you’ll beat out these candidates.

By pursuing entry-level work, you’ll ensure that next time around, you’re the one with relevant experience and that you can get the role of your dreams.

Want your degree to make a significant difference? Apply for the digital marketing roles that often end up overlooked.In most industries, internships are just for college students. However, ad agencies seem to play the game just a little bit differently. When I was a student, I actually came across a variety of internships that were just for graduates.

“Intern” isn’t the most glamorous job title, but if your goal is to pursue agency work, you’ll often finds that agencies value in-agency internships above relevant experience that comes from the corporate world.This, of course, is due to the commonly held belief that the two sides of the coin, agency and corporate, work in completely different ways.

Get in the door. Work as a contractor, an intern, a temp., or as almost anything else. Prove that you can work hard and grasp the culture, and you’ll end up on the path towards success.But don’t forget:There’s another route towards a digital marketing career, and no one’s paying attention to it. I’m talking about retail.

Remember when I complained about working retail a little earlier? As it turns out, retail can be one of the best ways to get started in digital marketing. After I finished out my tenure in a retail sales position, I levied that experience as well as my college degree to earn a role as a single store’s Social Media Specialist. I’m not kidding you:

I worked for just one grocery store (that was part of a larger chain) and had complete control over their social media marketing efforts. The page reached a local audience of 40 -50,000 on a regular basis.

Here’s why that matters: Sometimes it’s just not possible to land a glamorous role or even an internship. And yes, it can be hard to find stores that offer up the role of “Social Media Specialist” but when you do find these kinds of roles at places you frequent, be sure to apply!

Or, take an even easier route:Get started working for a small business. Tell the ownership about your digital marketing experience and offer to take over their social media and digital marketing efforts. Work on their website for free or give their social media presence a facelift. Odds are that they’re too busy to do this anyway. Doing this will give you a much needed portfolio piece as you move into the rest of your career. You may not earn a title this way, but hard work will surely pay off.

Having a hard time landing a job? Don’t waste your downtime. It’s time to go out and earn some certifications. When I was just starting out, I worked hard to earn the Hubspot Inbound Marketing Certification. It only took four hours or so, but in the eyes of many interviewers, it was my most significant accomplishment at the time. By earning this certification, I opened many doors and was invited to many interviews. Besides that, I learned a ton from the course.What’s a certification that’s relevant to the role you’re pursuing?

Most certification classes are free, and they can show that you have the grit and determination to advance every day. If you’re not sure where to start, try utilising Hubspot’s learning resources! There are plenty of great classes to pick from that all relate to digital marketing or sales.

Here’s a quick bonus tip. There are a lot of people out there who can “do everything”. While it’s great to have a variety of skills and abilities, I’ve often found that specialising in a niche can have a much greater effect on your career. Since moving on from the grocery store I originally worked at, I started work as a Content & Video Specialist at a company called FeedbackWrench. Before starting here, I was aware of the benefits that a niche focus has. However, it was demonstrated to me more clearly by one of our clients. One of the clients FeedbackWrench has is a real estate firm. However, this firm didn’t serve in the typical way that you might expect. Instead, they chose to focus in on duplexes, triplexes, and quads. They even decided to call themselves The Duplex Doctors. Because of this, they became the go-to duplex real estate agents in the Twin Cities and both buy and sell more duplexes in Minnesota than anyone else.

Why am I telling that story?

Because introducing yourself as a digital marketing professional is vague. If you’re aware of a specific category that you can excel in like SEO, social media, or the like, maybe it would be to your benefit to introduce yourself as a professional with just one or two specific focuses. As a “real estate agency” there’s no telling if The Duplex Doctors would have had any success. However, by choosing a specific niche, they set themselves up to corner their market. How can you make it clear that you’re able to do things in a way that no one else can?

Whether you’re a graduate, a marketing manager, the founder of a business, or a trainer we want to hear from you. We are building a network of amazing people who all recognise the need to develop, stretch and support our graduates in our fast-growing industry.