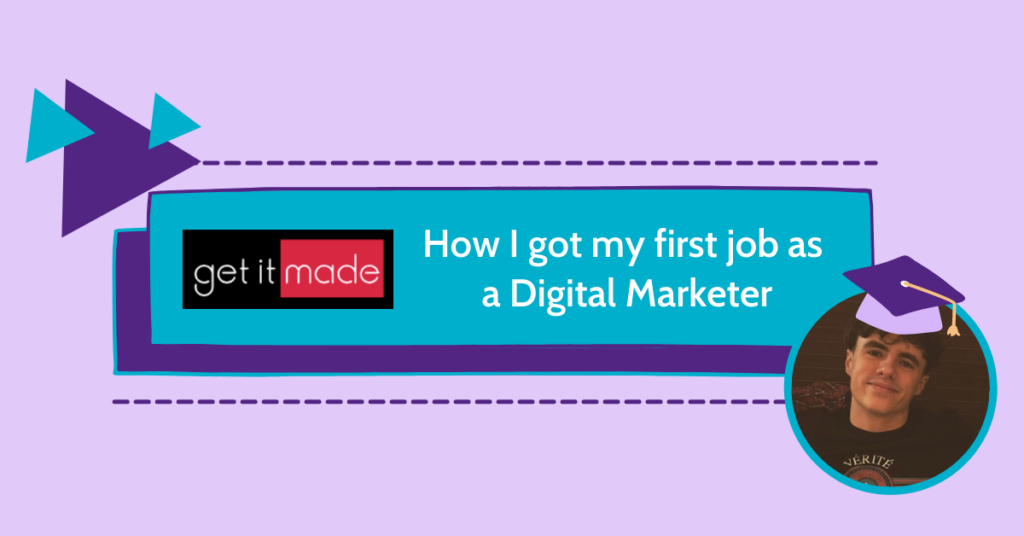 Ollie Cockman, now Digital Marketing Exec for Get It Made

Leaving university and finding it difficult to find a job is a familiar story for a lot of people.

Leaving university and finding it difficult to find a job *during a global pandemic* however, is a totally different story, and one that is familiar only to the graduating classes of 2020 and 2021.

It started as the same old story – entry-level roles requiring years of experience being out of reach for graduates, who could not ever gain said experience without being first given an opportunity in their chosen industry.

It is a vicious cycle that those in the early stages of their careers know all too well, but add onto that vast national unemployment caused by a pandemic, and that cycle starts to become even harder to break.

Job adverts evolved from having 10 applicants to 100 applicants overnight as more and more people became desperate for work. As a result, graduates, despite their impressive degrees, were pushed further down the pecking order, and jobs became harder to come by, and rejection letters all the more common.

It is easy to become disheartened with the job-hunting process when you face continued rejection such as this. I felt like I had done everything asked of me whilst at university. As well as studying hard academically for my degree, I had completed numerous internships and work experience periods in my chosen field or marketing, as well as working part-time at my Student Union. Despite this, however, my experience was nonetheless limited compared to those who had been in full-time work for two to three years who now found themselves competing for jobs against graduates.

Ten job applications turned into one hundred job applications, and the idea of finally being offered a position seemed to slip further and further away, until I stumbled upon the Digital Grads website.

During my first phone call with the team, instead of being greeted by an automated voice recording or someone desperate for me to accept a job in recruitment, I was greeted by someone who wanted to understand what my situation was, and the type of work I was looking for. Due to the work of Digital Grads and their constant communication and encouragement, within four weeks of joining the platform I had received two jobs offers, which had previously been unthinkable.

Having only started with DigitalGrads at the end of November, by the start of January I was starting my new position as Digital Marketing Executive here at Get It Made, a manufacturing company based in London. With a small and friendly team, I am learning a lot about the world of digital marketing, and can directly see my contribution to the company’s continued success.

Within a few weeks, DigitalGrads had taken me from a graduate deemed too inexperienced for employment, to a Digital Marketing Executive with his first step on the career ladder.